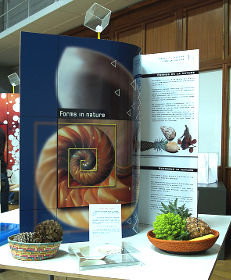 Why does soap bubbles floating in the air like perfect spheres?
Why does nature create regular structures and predictable movements as gravity ?

However, the telescope and the microscope reveal that from the infinitely large to the infinitely small, nature has more complex forms: spirals, fractals…
Mathematics: Numbers, differential equations, allow us to have a better understanding of life on the Earth or the structure of the Universe.

Choose a pin cone, a pineapple…
How many spirals are there in each direction?

Seeds of some fruits, petals of some flowers, Leaves of some trees, always divide up according to the same sequence of numbers: each number after the second is the sum of the two precedents ones.

This sequence is often observed in nature. So, in pin cone, pineapple, sunflower, the spirals sequences are numbers of the Fibonacci sequence.
It appears too in the lengths of the vertical (or horizontal) tangents of the chambered nautilus. Idea & Realization: Centre•Sciences & Tokai University. 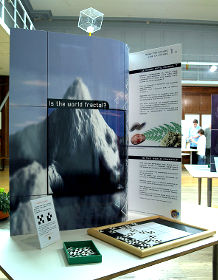 '''How can we represent the shape of a winding river, a rugged coastline ? The shape of a cloud, a flame or a weld?
Can we determine the dimensions of galaxies in the Universe ?

Can we model the intricate branching of activitie on the world wide web ?
Observe a fern leaf. It is built by repeating of the same motif on ever decreasing scales.
Such structure which often appears in nature led Benoit Mandelbrot''' to develop Fractal geometry.

A fractal is a self-similar shape every part of which looks like a smaller version of the whole. Benoit Mandelbrot (1924-2010)

Draw Me a Fractal!

Reproduce one of both drawings on a scale 3 times bigger, with these little pieces, and start again in 3 times bigger one more time.

What if you could repeat the process at infinity?
You would obtain an object where every part looked like the whole.
It is a fractal object. These objects, studied since the 19-th century, are popularized today by use of computers. Idea & Realization: Sierpinski & Centre•Sciences 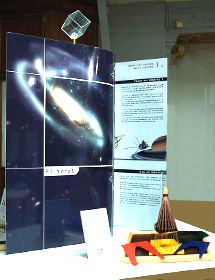 How can we describe the orbits of planets, natural or artificial satellites ?

Kepler''' showed that these orbits are conics: ellipses, parabolas, hyperbolas.
Comets that reappear periodically also have elliptic orbits. A satellite can free itself from the pull of the solar system by leaving its elliptic orbit to take place on an hyperbolic trajectory.

To follow and to direct the movements of the many artificial satellites circling the Earth, we use rosaries of… parabolic antennas. 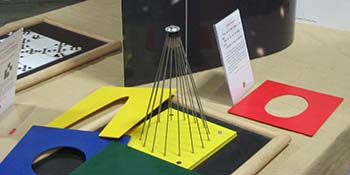 Place one of these sheets on the cone.
What do you see?
A circle? An ellipse? A parabola?
A branch of hyperbola?

If the sheet is horizontal, you obtain a circle.
If it is parallel to the beams which generates the cone, you obtain a parabola.
In between these two, you have an ellipse or a branch of hyperbola.
The universal laws of gravitation, established by Kepler and Newton, made it clear that the motion of celestial bodies trace one of these conic sections, from circle to parabola. Idea & Realization: Centre•Sciences