10.1- A Tricycle with Square Wheels 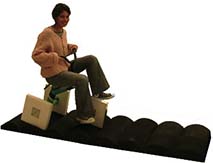 The equation of tis curve was found by Jean Bernoulli, Huygens and Leibniz in 1691.
Illustration: arcs in the shape of necklace inverted realized by the architect Gaudy for Sagrada Familia in Barcelona.
Idea: Tokai University - Realization: Centre•Sciences 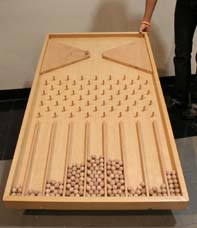 In this pinball machine, each ball falls down on the pins and tilt in two possible directions, left or right, with legal chances.
The balls arrive in the compartments regularly distributed.

A similar board was designed by F. Galton in 1889 to demonstrate many properties in probability.
It’s Francis Galton, en 1889, who demonstrated that, in this law called normal distribution, one find again the triangle of numbers called Pascal triangle.
Idea: Tokai University - Realization: Centre•Sciences 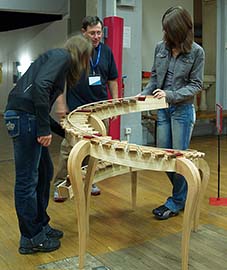 Do you know this song well know by the children and… by the biginner pianists?
Where are the mathematics?

A xylophone produces different sounds because of the difference in the lenghts of the keys. This model is a tree that plays music by adopting the principle of the xylophone.
Each branch of the tree represents a key of the xylophone. Keys are juxtaposed so that a ball rolling down from the topmost branch and hitting each key will produce a certain melody.

Some of the branches are covered with felt to represent rests. No sound will be produced when the ball hits these keys.
Idea: Tokai University - Realization: Centre•Sciences

This wood carving looks like an animal or… one another.

This carving is adapted from a picture used in psychological tests.
This model reminds students that in mathematics, as in life, it is important to be flexible and to be able to look at problems from various perspectives.
Idea: Tokai University - Realization: Centre•Sciences 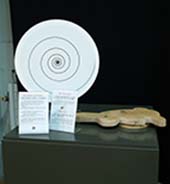 Turn the disk. What do you see?

The logarithmic spiral is commonly found in nature. The spiral does not alter its shape as its size increases as can be observed in the shell of the nautilus.
A logarithmic spiral is drawn on a circular disc as shown in the picture. When the disc is spun, then the spiral will appear to be expanding or shrinking. 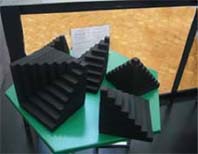 With these 6 blocks, try to build a big tower.

Roll the disk along the frame and observe the curve traced by one white point.

A cycloid is a curve traced by a fixed point on the circumference of the circle as the circle rotates along a straight line. Idea: Tokai University - Realization: Centre•Sciences

How many Edges, Faces, Holes, on this strip ?

You get a sequence of cubes increasingly smalls. The first, largest, is in the center. Then add two smaller.
If you go up to this small staircase, you meet the cubes in this order: 2-1-2.
By adding the four cubes nr3, you obtain the staircase: 3-2-3-1-3-2-3.
This stage 3 shows you how to deduce the new order from the precedent.
Add the cubes nr4, the staircase comes 4-3-4-2-4-3-4-1-4-3-4-2-4-3-4.
You can note that this order describes also the order of the folds mountains of the first line of the first model, the smaller fold being nr5, following nr4… Idea and realization: Jean Brette (Paris) 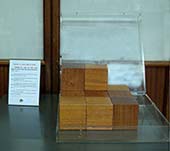 We encounter quite often in our daily lives the problem of packing things efficiently in cartons or in suitcases.
It is obvious that we can put 3x3 = 9, but a big gap results. It is not so difficult to put 10 cubes and in fact, 11 cubes will fit if we do it right.
This model is concerned with the problem of finding the smallest square into which 11 unit squares can be packed. The smallest known value for the length of the sides of such a square is approximately 3.877 units, discovered by W. Trump.
If n = m2, then the smallest square into which we can pack n unit squares must have side length m.
If n is not a perfect square, however, the problem of finding the length of the sides of the smallest such square remains open. Idea: Tokai University - Realization: Centre•Sciences 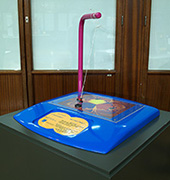 Swing the pendulum and try to guess at which magnet it will stop.
Repeat the experiment so that it stops on the same magnet.

If the pendulum starts from a blue point, it will stop over the blue magnet. But near the boundary lines, any small discrepancy will completely modify the trajectory of the pendulum. The system is said to be chaotic.

The famous butterfly effect: the flight of a butterfly in Brazil could cause a tornado in Texas several weeks later, is a metaphor introduced by Edward Lorenz in 1963 to illustrate the fact that meteorological systems are chaotic. Idea & realization: Centre•Sciences