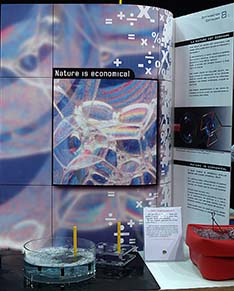 A soap bubble is spherical; stellar bodies are almost spherical. Why?

A liquid mass in relative equilibrium, a drop of oil in suspension or rotating in a liquid, planets when they are being formed, take on spherical shapes, either unique or multiple.

These shapes have the least potential energy which is proportional to their body surfaces. 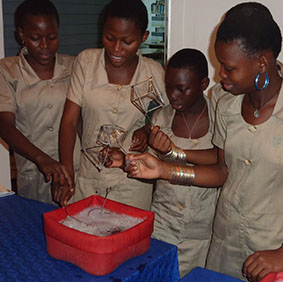 While setting up communication networks, the problem of determining the shortest length of wire that connects n given points has arisen.
This problem is known as the Steiner problem.
The simplest form of the problem is the 3 points problem.
To connect them with the minimum length of wire, we have to lay them on the vertices of an equilateral triangle.
It should be well known that the minimal network for the regular hexagon has no Steiner points. Idea & Realisation: Plateau & Centre•Sciences

8.2 The Earth under surveillance 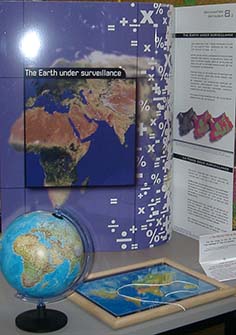 How does one find a good representation of the earth?

That depends on the use one wishes to make of it.
After having found cartographic projections adapted, for example, to navigation, today we seek to exploit images taken by satellites or from the air to optimize surveillance or the management of resources.

For each pixel of an image one determines the type of terrain - rock, sea, river, forest, the type of cultivation ...
By combining the information supplied by measuring instruments (high resolution spatial and spectral sensors) learning algorithms can be developed.

The models thus constructed are validated by observations on the ground.

The Shortest Path on Earth 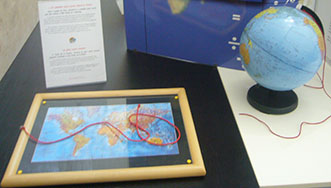 Use the string to find the shortest path from Paris to Vancouver or to Tokyo.

On Earth, the shortest path between 2 points lay on the larger circle passing through these 2 points.
This circle’s centre is the Earth's centre.
If you look at the shortest path on a map, you will see that it is not the straight line.

8.3- The most efficient shapes 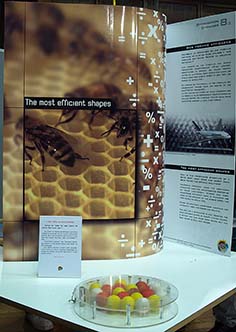 Why is the honeycomb structure of a bees nest used more and more?

Have bees found the optimal solution?

Materials designed using the honeycomb structure have the advantageous properties of being lightweight, strong and rigid. Honeycomb materials made in aluminium are used in the building of the Airbus A380, the TGV, satellite walls...

Paper or polyvinyl honeycomb materials are currently used for doors and pallets.

The cell of a honeycomb is not, however, the most efficient shape to occupy a given volume. A better way has since been found, but the best shape is still not known. 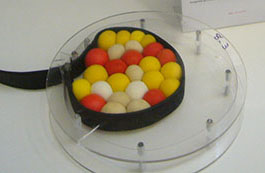 Squeeze the balls together. What happens now?

Among geometric figures with the same circumference, the circle encloses the largest area.
However, if we were to try to cover the entire plane with circles which do not overlap, there will be gaps which will remain uncovered.
For a given fixed circumference, a regular hexagon is the figure which covers the largest possible area of a plane without gaps. Bees seem to be familiar with this principle.
Their hives are covered with hexagonal shapes which use less material to cover larger areas. Idea: Tokay University - Realisation: Centre•Sciences