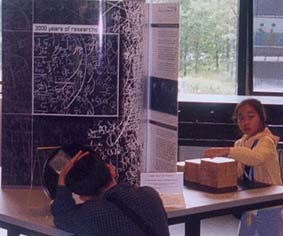 Does doubt exist in mathematics?
Can one be satisfied with a collection of presumptions if they are 99% correct?

Demonstration is the basis of a mathematician's activity and is, in fact, its originality. The first proofs were simple, written in a few lines and comprehensible to someone with a high school diploma.

Today we have proofs which represent hundreds of pages, which require the use of computers and which are verfiable by only a small number of specialists.

The complexity of the world poses mathematicians with more and more questions. To answer them they must work out models which must then be proved to be relevant. 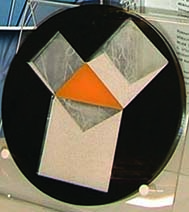 Under the Sand, The Theorem

Turn the disk and...
discover the Pythagoras Theorem.

In a right triangle,
the sum of squares of the sides of the right angle
equals the square of the third side.

This theorem proves that the ratio between diagonal and the side of a square is neither a whole number nor a rational number. Idea & Realisation: Centre•Sciences

9.2- From Pythagoras to Wiles 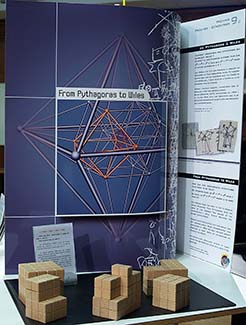 The Greeks were the first to try to resolve these problems. Then Pythagoras gave his name to the theorem "The square of the hypotenuse...", while Euclid provided the oldest known proof.

Fermat later formulated that this result was not generalizable.
Wiles demonstrated this conjecture in 1994! He used the most recent research in many areas of mathematics to produce his result.
Mathematicians regularly strive to make known the big problems which still have to be resolved.

Euler was engaged in a prodigious scientific activity even when he was blind, during the last twelve years of his life.
He gave us the Euler formula for graphs, the strict definition of the function notion and of infinitesimal calculus. Euler also worked on mechanics, optics and astronomy…

Another prodigious mathematician was Fermat. He said that the equation Xn + Yn = Zn, where n is an interger greater than 2, had no whole solution (except with 0). Any proof has been found before Andrew Wiles (1994). Idea & Realisation: Centre•Sciences 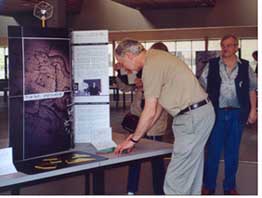 Can we always prove something that we know to be true?

In 1931, Kurt Gödel, in a genuine coup de théâtre, answered in the negative with his famous so-called "incompleteness" theorem.
He proved that the two notions of truth and provability do not coincide by discovering a formula about integers which is true but unprovable in elementary arithmetic.

Still more surprising, Gödel also showed, in the same spirit, that it is possible inside arithmetic neither to refute nor to prove that one will never arrive at a contradiction.
Elementary arithmetic is moreover undecidable. As a consequence, it is for instance impossible to write a computer program that would check whether or not a given formula about integers is true. Kurt Gödel (1906-1978)

Any two squares of different sizes can be taken aparts and reassembled to form an other square.
This is the principle used in this Pythagoras'puzzle.
Can you make another square with two of this five pieces puzzle? Try it at home!

Three for four, four for three…

With the 4 bicolor pieces, build a square or a triangle.

How to transforme a table for 4 persons into a table with 3 places setting?
You have two technical possibilities to find a solution.
In mathematics, there are no problems, only solutions… (to find !). Idea & Realisation: Centre•Sciences