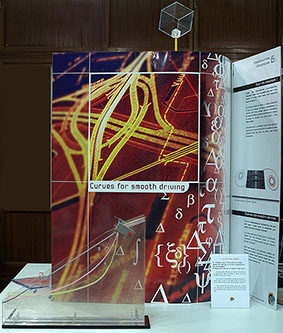 At the interchanges of motorways, how can one make a road which is smoother and safer for more efficient driving?

In a car, when one is travelling at a constant speed and the steering wheel is turned uniformely, the trace which the car makes is called "clothoid".

This trace reduces the centrifugal forces and gently links a straight line with a curve. 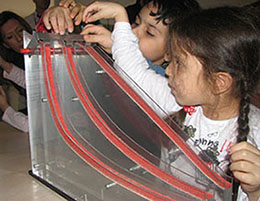 Prepare to release the marbles - one the same time.
A- When the marbles roll down the slide, which one arrives first?
B- Which one will go the furthest?

The straight line is the shortest path, but it’s not the fastest.
So, which is the fastest path?
The solution to this problem turns out to be neither a straight line nor a circular arc, but, like Bernoulli has shown, a portion of a curve called a cycloid.
A cycloid is a curve traced by a fixed point on a circle when the circle rolls along a straight line. Idea & Realisation: Bernoulli & Centre•Sciences 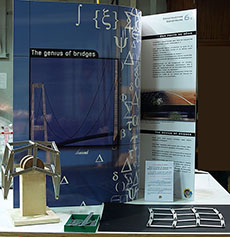 How can one build longer and more daring bridges?
The first bridges used wood and stone. Iron, steel and concrete bridges appeared later.

New problems arrose: the dynamic behaviour of suspension bridges, the complexities of managing road construction.
Now computers and their calculability power allow these problems to be resolved, step by step, achieving bridges which beat all records.

A Problem of Rigidity

How can we fortify these structures with a minimal set of diagonals?

To fortify a frame in the plane, it’s necessary to judiciously place diagonals as a scaffolding, skeleton of house or bridge.
The following simple formula : 2 V - E - 3, allows finding the minimum number of diagonals that is necessary to reinforce the structure - V indicates the number of vertices and E el the number of edges of the frame.

On the other hand, polyhedrons and other frameworks, are also characterized by their number
their number V of vértices, F of faces and E of edges:
V + F – E is a constant which depends only on the number of holes of the surface.
Discovered by Euler (1707-1783), this relation was demonstrated by Poincaré (1854-1912). Idea & Realisation: Janos Baracs (Montreal) & Centre•Sciences 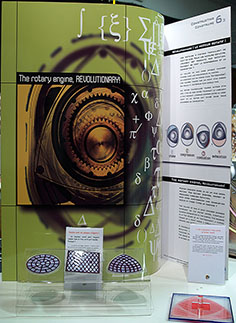 Piston engines work in an up and down motion.
For rotary engines, energy is produced through rotation.

How does compression and combustion occur in these types of engines ?
The volume of gas in each chamber changes extremely as the rotor moves, eventually causing combustion in the engine. The housing is in the shape of an “epitrochoid”, a curve traced by a point inside a circle as it rolls around the outside a fixed circle.

A triangular rotor rotates around a broad bean-like housing, all of its vertices touching the housing at any time.
The space between he housing and the rotor is divided into three chambers. L'espace compris entre le logement et le rotor est divisé dans trois chambres de combustion.

Why are Manhole Covers Round?!

A square cover can fall into a square manhole of the same size. Why ?

This is because the diagonal of a square is longer than the length of its sides.
On the other hand, a round cover cannot fall into a round manhole of the same size because a circle has constant width, i.e., the distance between any 2 parallel lines which are tangent to the circle is constant.

A standard drill makes a round hole, but drill like this “Reuleaux triangle“ makes a… square hole!
For the rotary engine, a triangular rotor rotates inside a broad bean-like housing, one of its vertices touching the housing at any time. Idea: Tokai University – Realisation: Centre•Sciences