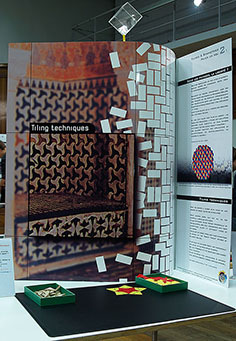 Can we cover a floor with tiles of any shape without gaps or overlaps?
Many shapes work, but not all as, for example, a regular pentagon.

Tiling patterns, which repeat periodically by translations, are well understood and their symmetries allow 17 different types of patterns.
The study of these types and their symmetries is based on the Group Theory devised by Evariste Galois. If we want to tile more freely -not periodically- the study is far from being finished.
So, is it possible to tile using only one shape? It's a mystery!
Tiling patterns find applications in mathematics, crystallography, codes, particle physics...

Any set of quadrangle can cover the plan. But it’s not the case with other types of polygons
For example regular pentagons cannot cover the plan without holes.
Nevertheless, they allowed Roger Penrose to build quadrangles which cover automatically the plan, but without the regularity of the periodic pavements.

In 1984, crystallographers built new crystals, called up quasi-crystals, which have the same non-periodic properties in space. Since one has demonstrated that these non-periodic pavements are projections of regular pavements in 6 or more dimensions! Idea & Realisation: Roger Penrose, Jean Brette & Centre•Sciences 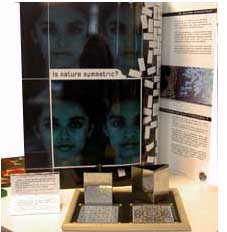 Why does the double helix of DNA always turn in the same direction?
Why is a human face and its reflection in a mirror not superimposable?


From the infinitesimal to the infinitely large, symmetries are shown in many mathematical models. But nature rarely presents perfect symmetries. Some elude us, others are convenient to assume they are perfect.

Living forms which turn to the right are much more frequent. This bias towards asymmetry may be explained by chance or by the asymmetry of physical forces: the question remains open.

The Good Mirror at The Good Place 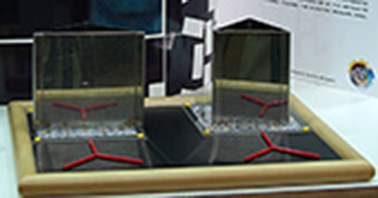 Choose a mosaïc and place the good kaleidoscope above it at the good place so that the whole mosaic can be seen inside.
Place one of the mirrors on the red lines. It’s like a kitchen pavement!

The Islamic pavements are repetitions at infinity of the same pattern. It is drawn in a triangle that is reproduced by mirror- symmetry to give a square, a hexagon or any other polygon having an even number of sides.
Artists like Escher have used the same technique with more figurative patterns. Idea & Realisation: Centre•Sciences 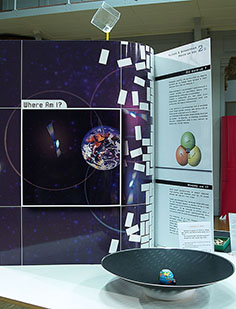 How many satellites, in orbit around the earth, are needed for us to know where we are all the time ?

Three are enough: they measure their distance to the tracked object (a fourth gives a time correction which improves precision).

The object to be located is fitted with a portable receiver which communicates with the satellites by electro-magnetic waves.
Its position is at the intersection of 3 spheres each centered on one of the satellites and their radius is the distance from the object.
The GPS (Global Positioning System), the Russian systems -and soon the European Galileo system- allow us to know where we are all the time.

Take the dish in your hands and try to turn a marble go around the Earth.
Can its trajectory be circular?
Now, make a try with two marbles.

During its launch, a satellite is placed on an elliptic orbit.
Observation satellites of Earth are on geo-stationary orbits.
For these satellite problems, mathematicians use tools developed for a long time by Kepler, but also recent results that take into account the theory of relativity. Idea & Realisation: Jean Brette & Centre•Sciences.